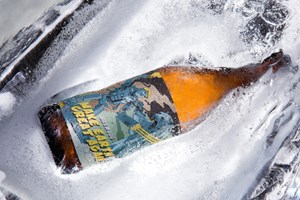 According to the company, the inspiration for the beer came from US President Donald Trump’s decision to pull America out of the international Paris Agreement on climate change, which was brokered by nearly 200 countries in November 2015.

In an effort to raise awareness of the effects of climate change, the water for the beer was sourced from melting Artic ice caps, and ingredients include Arctic cloudberries. The beer was also purposefully fermented at a higher temperature than usual.

All proceeds will be donated to climate change focused environmental charity, 10:10.

“Beer is a universal language, with the capacity to make an impact the world over, so we decided to make a statement and brew a beer that could have a direct, positive impact on climate change both through supporting an organisation making a difference, and providing a vehicle for craft beer fans to make their voices heard.”

A case of the beer has also been sent to The White House “in an attempt to capture the attention of the President”.

The campaign is the latest of several environmental announcements from leaders in the beer industry in 2017.

In June, Carlsberg revealed a new sustainability plan that aims to cut “beer-in-hand” emissions by 30 per cent by 2030.

Meanwhile in May, Corona announced a new partnership which aims to protect 100 islands from marine plastic pollution by 2020.

Posted under General Interest / Food and Drink on 8 November 2017