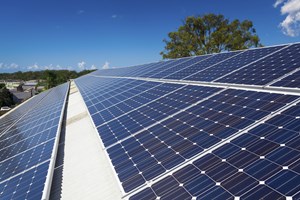 Proposed business rates for 2017 look positive for companies that use solar mainly to export power to the grid, but those that use their panels mainly to power themselves could see a tax hike.

Under proposed rateable values for commercial properties from April 2017, owners of solar panels have been split into two categories – those that export over 50 per cent of their generated power to the grid, and those that mainly use it to power their own operations.

While businesses in the former category can expect a decrease in business rates, those that use solar power on-site could see a six to eight fold increase in the rates they have previously paid for owning solar panels.

The changes are not applicable to solar arrays owned by a third party and will therefore not affect companies that have installed solar under a purchase power agreement (PPA).

Microgeneration solar arrays with a capacity of less than 50kW have also previously been exempt from business rates, but it not yet clear whether this will be made permanent.

The solar industry and green economy advocates have called on the government to take action to avoid the perverse outcomes that could arise depending on who owns the solar panels and how the power is used.

For example, an organisation that owns and uses its own solar panels is set to pay far more than in a scenario where the panels are owned by a third party.

Paul Barwell, chief executive of the Solar Trade Association (STA), said: “The good news for ‘export’ solar is that, in most cases, the rateable value will fall from 2017, some by as much as half.

“Rates should reflect the true value of the solar asset, as well as the income received [from subsidies]. As both of these have fallen dramatically over the last five years for solar power, the rateable value has also fallen: logic has prevailed.

“We now need Ministers to act to ensure similarly fair treatment for those supplying themselves with their own rooftop solar.”

MPs from several parties have already raised the issue in Parliament, which is waiting for more detailed proposals to form a view.