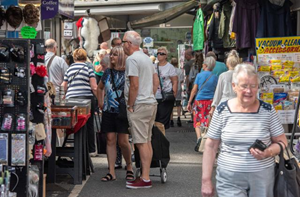 Bury Market has won a Green Apple Environment Award for its work to reduce energy consumption and waste across its site, which attracts thousands of visitors every week.

More than 500 nominations were received for the awards, which aim to celebrate the greenest companies, councils and communities in the UK and internationally.

Bury Market was nominated after taking a number of measures to reduce its environmental impact and make cost savings.

Automatic meter reading apparatus for gas and electricity has also been installed to allow better analysis of energy cost and consumption.

Meanwhile, refurbishment of Racliffe Market Hall included new heating, lighting and insulation measures and the installation of solar panels on the roof. The Hall’s operator has also agreed to boost recycling and use suppliers who reduce bulky packaging.

On waste, Bury Market sells a proportion of the waste collected on site for recycling and sends the rest to a facility that turns the waste into fuel.

Markets manager Andrew Heyes said: "In recent years we have implemented a wide number of schemes to improve our environmental performance and reduce expenditure. We will continue with this work, for which we are delighted has been recognised at national level.”

Market bosses will be presented with their trophy and certificate at Westminster Palace on 12 November, and the market could also progress to represent England in the Green World Awards competition 2019.