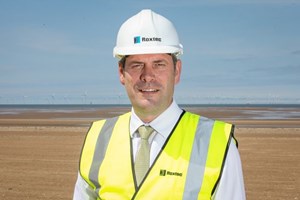 Safety seal manufacturer Roxtec is playing a major role in a new £1.3 billion offshore wind farm in Sussex - one of its many forays into the rapidly growing renewables industry.

Roxtec designed and supplied all the seals on cables being used in the Rampion offshore wind farm, which will be completed in 2018.

The work to install 116 wind turbines 13km off the coast of Sussex began in April 2017. Once complete it will occupy an area almost three times the size of Manhattan and generate 400MW of power.

“This contract involved supplying seals for single-core cables, both high and medium voltage, in the bulkhead and deck areas of the platforms”, he said.

“Roxtec benefits from extensive experience of sealing cables on offshore platforms. Our solutions are particularly suited to this market because they are flexible and versatile.”

Roxtec has moved fast to capitalise on growing opportunities in the renewables supply chain.

In 2015, the company provided waterproof seals for the manufacture of the world’s largest and most powerful tidal energy turbine, which was being developed in Orkney.

According to the government’s latest accounts, low carbon and renewable energy activities generated £43.1 billion in turnover in 2015.

Posted under Energy and Renewables / Other Manufacturing on 2 August 2017