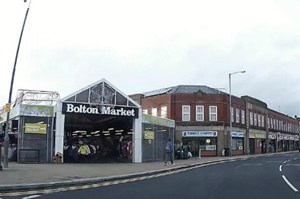 Bolton Market has been announced as a winner in the Love Energy Savings Awards for the second year running after taking measures to reduce its energy consumption.

The annual awards were launched by energy tariff comparison site, Love Energy Savings, in 2015 to celebrate the green achievements and energy efficiency of businesses across the UK.

Bolton Market has been named winner in the ‘Super Saver’ category of the 2016 awards after retrofitting its site with several energy efficient additions.

The market took an interest in improving efficiency following a £4.5 million refurbishment in 2013, which has resulted in more than 250 traders using the market every day.

Since 2015, all of the market’s lighting has been switched to LEDs with sensors where possible, while its old glass roof panels have been replaced with polycarbonate alternatives to reflect heat away from the building. Two of the site’s roof elevations have also been fitted with solar panels.

The work has resulted in a huge reduction in energy wastage, consumption and running costs, according to general manager of the market, Peter Entwistle, who has described their environmental efforts as a “massive success”.

Bolton Market was previously named winner in the ‘Innovative Saver’ category in 2015 after installing a cardboard baler to help recycle the large volume of cardboard boxes used by traders at the market every day.

The move was expected to save around £12,000 on annual waste costs but ended up saving at least £17,000 after management worked with traders to change their attitudes on recycling.

Following its success with cardboard waste, the market then went on to install a polystyrene baler to help recycle polystyrene waste.

The market’s vision for the future also includes harvesting rainwater for use in customer and trader toilets, which would result in a large reduction in water consumption at the site.

Phil Foster, managing director of Love Energy Savings, said: “It was an incredibly difficult task to select the finalists of this year’s awards.

“We hope that receiving the awards not only gives the winning businesses the recognition they deserve for their efforts to become more environmentally friendly, but that they also inspire others to follow in their footsteps.”