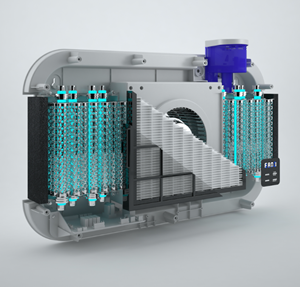 Tech company Radic8 has launched a campaign to help forward-thinking businesses to advertise that the air in their buildings is clean and safe from air pollution.

The ‘We Share Clean Air’ campaign was launched to coincide with the UK’s first ever national Clean Air Day, which aimed to raise awareness of the impacts of air pollution.

Concern about illegal levels of air pollution in the UK has risen in recent years, and the government has recently proposed a new national air quality plan to tackle the main causes, particularly diesel vehicles.

Radic8, which has offices in Bolton and Seoul, has developed air cleaning technology which can remove dangerous pollutants in a matter of hours.

“The benefits to businesses are plentiful”, said owner Richard Greenwood.

“For employees, they know they are spending their day in a healthy environment, and will be happier, healthy and more productive for it.

“For customers looking to make a choice of where to shop, stay or eat, a clean air venue will stand apart from the crowd.”

Radic8’s campaign uses an interactive map that shows every location around the world that has installed its clean air technology to date.