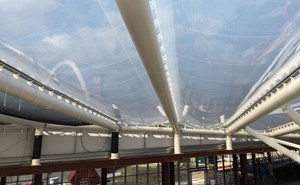 Bolton is adding to its growing sustainability credentials by incorporating several eco-friendly and energy saving technologies into its new £48 million transport interchange.

The new Bolton Interchange, which is being delivered by Transport for Greater Manchester (TfGM) in partnership with Bolton Council, will improve passenger facilities and provide a skylink bridge connecting to Bolton train station once complete.

According to transport leaders, eco-friendly initiatives have been a key consideration during development to minimise energy consumption and reduce environmental impact.

Among the most impressive features is a suite of technologies used on the roof of the building.

Ethylene Tetrafluoroethylene (ETFE), a lightweight alternative to glass, has been used to allow natural light into the centre of the building and reduce the requirement for artificial lighting. The same material was used at the famous Eden Project in Cornwall.

Solar panels on the roof will also generate electricity for the facility, while ‘living rooftops’ are being added to enhance biodiversity on the site and improve thermal performance.

In addition, a rainwater harvesting system will collect water from the roof into large buried tanks to flush public toilets on site.

Meanwhile, air source heat pumps are being installed to help regulate temperature in the interchange more efficiently. The pumps transfer air from outside the building, heating and cooling the facility in winter and summer respectively.

A high efficiency heat pump can provide up to four times as much heat as a conventional electric heater or air conditioning unit using the same amount of energy.

Cllr Andrew Fender, chair of the TfGM committee, said: “Promoting sustainability is a pressing issue for Greater Manchester and our aim is to support economic growth in the region while also protecting the environment and improving the quality of life for residents.

“The benefits of the new interchange for Bolton are not just about getting people from A to B more reliably and more quickly; there is also an environmental reward.

Bolton is also halfway through a major rollout of LED street lighting that will see approximately 27,500 lights across the borough replaced with energy efficient upgrades by 2018.