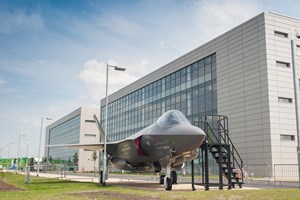 The global defence contractor has benefitted from multiple energy efficiency investments at its manufacturing sites in Lancashire, including a projected £2 million saving from re-using waste heat.

The company has a 9,000 solar panel array at its manufacturing site at Samlesbury that generates 2GW of electricity a year - enough to power a third of the site’s needs. The array saves £300,000 a year and has contributed to significant reductions in carbon emissions.

Speaking to the Lancashire Evening Post in April, Mark Tooth, sustainability manager for BAE Systems Military Air and Information, said: “The investment in the large scale solar farm has reduced our carbon footprint and operations costs.

“It’s a virtual circle. In its first full year it actually performed better than expected and slightly exceeded our expectations. It does not produce as much electricity in the winter obviously because the sun is further away and lower in the sky but over the year, it is very successful.”

However, the biggest impact on the site’s operations has come from energy efficiency improvements.

Meeting energy efficiency targets is increasingly important to the company’s public sector customers such as the Ministry of Defence and the Australian Defence Force, which are obliged to become more sustainable under international commitments.

The Samlesbury site has developed an innovative ‘energy loop’ that connects heating and cooling systems and is expected to save more than £2 million over the next ten years in reduced energy costs.

The system works by capturing waste energy from manufacturing machines and using it to heat other areas of the facility such as offices and staff amenities.

An initial trial produced 0.5MW of heat - enough to heat 60 houses, despite using just five per cent of the energy used by the previous heating system.

A planned employee restaurant and wellbeing facility at the Samlesbury site will also include a variety of green measures to minimise environmental impact, such as maximising the use of natural light and additional solar panel installations.

Meanwhile, a nearby site at Warton identified that it could save 800 tonnes of carbon per year by using plant and equipment more efficiently. For example, it is now using small-scale solar thermal systems to pre-heat domestic water supplies.