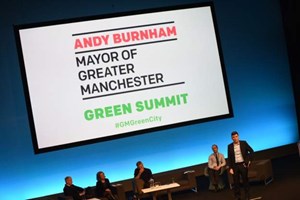 The landmark event, which can be watched back online, took in the views of climate scientists, leading businesses, residents and government officials.

“A carbon-neutral city region needn’t be some far-off ambition, the reality is that we can’t afford to wait; climate change is happening now. A green future is there for the taking if we just take that first step to go for it”, Andy Burnham said.

“All businesses need to become green businesses, and the quicker we make this change, the bigger our economic and environmental advantage.”

Key announcements and proposals from the summit include:

• Pushing forward an existing ‘carbon neutral’ target of 2050 by at least a decade, making Greater Manchester one of the most ambitious cities in Europe

• Doubling the size of the city region’s electric vehicle charging network, moving to a completely emissions-free bus fleet and investing up to £50 million in cycling infrastructure