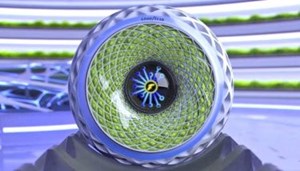 Vehicles of the future could actually help to reduce pollution rather than add to it after Goodyear Tyres unveiled a new concept tyre that contains moss to clean the air while in motion.

One of the more outlandish green innovations of recent months, Goodyear Tyres unveiled the concept at the 2018 Geneva International Motor Show.

The Oxygene tyre has a unique structure that features living moss growing within the tyre sidewall. The open structure and the tyre’s smart tread design absorb and circulate moisture and water from the road surface, allowing photosynthesis to occur, thereby taking in carbon dioxide from the air and releasing oxygen.

The tyre itself is made from a 3D-printed rubber powder from recycled tyres, producing a lightweight and puncture-free structure. It even has the potential to generate its own electricity by harvesting the energy generated during photosynthesis.

Goodyear said that the concept was inspired by the principles of the circular economy, with an emphasis on reducing material waste, emissions and energy loss.

“With more than two-thirds of the world population expected to live in cities by 2050, the demands on transport networks in urban environments will increase substantially”, said Chris Delaney, president of Goodyear Europe, Middle East and Africa.

“Oxygene is meant to challenge our thinking and help drive the debate around smart, safe and sustainable future mobility. By contributing in this way to cleaner air generation, the tyre could help enhance quality of life and health for city-dwellers.”