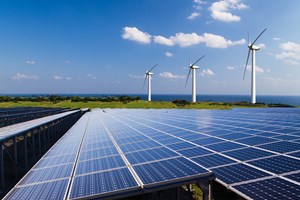 Food giant Mars has launched a huge sustainability drive beyond its own operations to tackle what it describes as a ‘broken’ global supply chain.

With its own operations in the US and UK already powered by 100 per cent renewable electricity and an existing plan to reach net zero emissions in-house by 2040, the new ‘Sustainable in a Generation’ initiative expands Mars’ sustainability ambitions to its suppliers.

This includes a 67 per cent cut in emissions from its value chain by 2050 (against 2015 levels), holding water use at “sustainable levels” and a commitment to “hold flat” the total land use associated with the value chain.

Mars chief executive Grant Reid, said: “While many companies have been working on being more sustainable, the current level of progress is nowhere near enough.”

“Mars has been in business for four generations and intends to be for the next four generations. The only way that will happen is if we do things differently to ensure that the planet is healthy and all people in our extended supply chain have the opportunity to thrive.

“We must work together, because the engine of global business – its extended supply chain – is broken, and requires transformational, cross-industry collaboration to fix it.”

Supply chains in the spotlight

To support its goals, Mars plans to invest $1 billion, mainly towards rolling out renewable energy and supporting agricultural suppliers to use raw materials more sustainably.

The company has announced that it will also reach out to its consumers - using its popular M&Ms brand to promote renewable energy.

Mars is not the first major corporation to launch a significant sustainability drive across its supply chain. Earlier this year Walmart launched Project Gigaton, a plan to cut one billion tonnes of carbon emissions from its global supply chain by 2030.

To read more about the Sustainable in a Generation plan and how Mars aims to achieve its targets, click here.