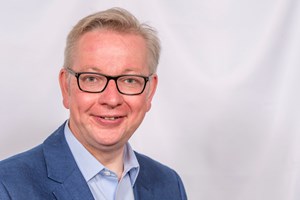 Michael Gove has delivered his first major speech as environment secretary, outlining a ‘gold standard’ vision for future policy and proclaiming ‘I am an environmentalist’.

In a speech entitled ‘The Unfrozen Moment - Delivering a Green Brexit’ at WWF’s Living Planet Centre in Woking, Gove outlined the “historic opportunity” to review the UK’s environmental policies on everything from animal welfare to water and waste.

“We have lost green space, cut down trees, sacrificed meadow and heathland, polluted our earth, air and water, we placed species in danger and we’ve run down the renewable resources - from fish to soil - on which our future depends.

“At the same time, across the globe, we’ve seen climate change threaten both fragile natural habitats and developing human societies, we’ve allowed extractive and exploitative political systems to lay waste to natural resources and we’ve placed species of plants and animals in new and mortal danger while gambling with the future health of the whole world”, he said.

Life outside the EU

The environment secretary added that he had no intention of weakening the environmental protections already put in place under EU membership.

On waste, Gove raised the prospect of reforming recycling policy to incentivise action “according to the environmental impact and value of the material, rather than a crude weight-based target that currently focuses recycling on things that happen to be heavy.”

He also committed to exploring new methods of reducing plastic waste beyond the planned banning of microbeads in consumer products, mentioning plastic bottles in particular.

“I want to improve incentives for reducing waste and litter, and review the penalties available to deal with polluters - all part of a renewed strategy on waste and resources”, he said.

The government’s forthcoming Clean Growth Plan was also mentioned, which was described as a shift that “should reinforce our ambition to be the home of the most economically and environmentally ambitious policies in the areas of clean, green, technology, from energy generation to transport, the circular economy to house building.”

The full plan is due to be released in the Autumn after a lengthy delay.