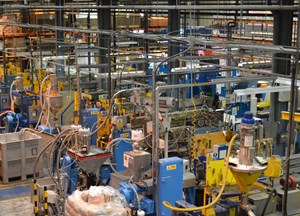 A survey of UK manufacturers has found that the majority of North West companies are engaged in innovation, with around half doing so to comply with environmental standards and regulations.

The survey, conducted by manufacturers’ organisation, EEF, in partnership with Vodafone, shows that the UK manufacturing sector is leading the way on innovation, with a particular emphasis on satisfying customers, increasing productivity and accessing new markets.

In the North West, three quarters of manufacturers are engaging in innovation to improve products and manufacturing processes, with 51 per cent doing so in order to comply with higher environmental standards and regulations – a higher figure than any other UK region.

Nationally, the number of companies reporting that the development of low carbon technology has been a driver of their innovative activity has also increased from 14 per cent to 19 per cent over the last year, showing a gradual move towards green and low carbon products.

Tim Hancock, head of manufacturing at Vodafone UK, said that innovation was an “essential ingredient” to keep pace with competitors both at home and abroad.

“It’s essential that we create the right environment for continuous innovation in manufacturing, which is the backbone of UK industry”, he said. “The good news is that almost all manufacturers are innovating in one form or another and with a variety of business goals.”

However, the survey also reveals that small manufacturers across the UK are finding innovation challenging, with a lack of resources often reducing the chances of success.

Stephen Fitzsimons, North West region manager at EEF, said: “Manufacturers continue to forge ahead into new markets at home and abroad, with investment in innovation playing a starring role.

“However, innovation is a resource-hungry process and manufacturers are finding that the results they achieve do not always match their ambition. This matters for manufacturing and for the UK because manufacturers are increasingly concerned about falling behind competitors.

“We’ve seen year after year that manufacturers want to do more and every additional pound invested in developing the products and services of tomorrow can help get the UK closer to its goal of having a more productive economy.”

The findings complement a separate study by the Government’s Business Growth Service, which found that 84 per cent of manufacturers were caught in a “productivity puzzle” and needed to boost efficiency, reduce waste and maximise output if their growth forecasts are to be met.

Posted under General Interest on 9 September 2015