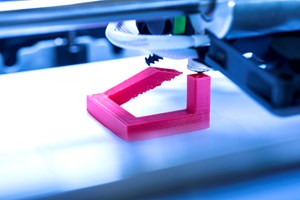 A coalition of MPs and business leaders have argued that 3D printing is a huge environmental opportunity for manufacturing, and the UK is one of the best-placed countries to capitalise.

Also known as additive manufacturing (AM), 3D printing is a computer-aided process of adding layer-upon-layer of material to create an object - the opposite of conventional ‘subtractive’ manufacturing.

The technology means customised parts can be built on-demand, in small batches and with much less material than conventional manufacturing.

Early adopters include Mercedes-Benz, which started using the technology in 2016 to make spare parts on-demand as part of its after-sales service.

According to research commissioned by Hewlett-Packard (HP), the UK is second only to Germany in Europe as the best-placed country to adopt 3D printing, and fifth globally overall.

In response, the All-Party Parliamentary Manufacturing Group (APMG), a cross-party coalition of MPs and manufacturing organisations, is exploring how to encourage companies of all sizes to adopt the technology.

“3D printing presents a range of exciting futures for manufacturing in the UK, and on an international stage the UK is a serious player in the sector with a strong combination of start-up activity and academic excellence”, the APMG said in a statement.

“Comparing additive to conventional subtractive manufacturing, [3D printing] can lead to incredible reductions in materials waste by using only the amount of material required to produce a part.

The technology also has a growing presence in the North West. LPW Technology, a global leader in manufacturing metal powders for 3D metal printing, has just opened a cutting-edge £20 million facility in Widnes.