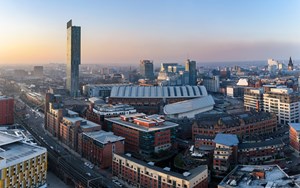 As part of the government’s landmark 25 Year Environment Plan, Greater Manchester and Cumbria have been chosen for ‘pioneer projects’ that will help to develop and share good practice.

The long-awaited 25 Year Environment Plan, published on 11 January, sets out the government’s long-term green vision for the UK to 2042.

Four ‘pioneer projects’ have been created across England to develop new ways of enhancing the environment that will inform the implementation of the plan over its lifetime.

Greater Manchester has been chosen as an Urban City Pioneer, with the objective of exploring how environmental enhancements can improve people’s lives.

Existing schemes involved include Natural Course and RESIN, which focus on waterways and climate resilience respectively.

Cllr Alex Ganotis, leader of Stockport Council and Greater Manchester’s green city region lead, said: “That Greater Manchester has been selected to be the UK’s national urban pioneer city region is testament to the hard work being done by our local communities and partner agencies to better support our environment and achieve carbon neutrality.

“This will also feed into the work of our Green Summit in March, where we will be developing our ambitious goal of becoming a carbon-neutral city; acting now to prevent further damage to our environment and create a greener, healthier and more attractive region for the people who live and work here.”

Cumbria has been chosen as a River Catchment Pioneer. The project, also led by the Environment Agency, is exploring natural approaches to managing flood risk in the aftermath of the severe flooding the region experienced in 2009 and 2015.

Posted under General Interest on 25 January 2018