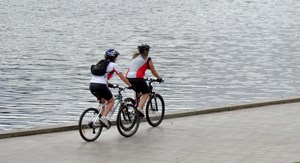 23 councils across the country, including Greater Manchester and Cheshire East, have been given nearly £21 million of government funding to promote cycling and other green forms of transport.

The funding is part of the Department of Transport’s Sustainable Travel Transition Year competition for local authorities.

The competition aims to boost local economies by offering cheap, clean and healthy travel options to improve access to jobs and education while cutting emissions.

The funding in Greater Manchester will be used to get 1,600 more people regularly making journeys by bicycle, encourage 1,300 more passengers a day to use public transport, and generate over £1.7 million of health benefits.

Workplaces, schools and colleges will be able to benefit from support to promote walking and cycling, as well as grants to improve cycle facilities.

In support of Greater Manchester’s Cycle City programme, more than 3,000 adult cycle training places will be provided to equip new and existing cyclists with the skills and confidence to cycle more frequently, as well as 100 professional driver training sessions to increase cycle awareness.

More than 12,000 free and discounted bus and tram tickets will also be made available to jobseekers, as well as free recycled bikes and accessories through the city region’s Bike Back to Work scheme.

Councillor Andrew Fender, chair of the TfGM Committee, said the funding will allow Greater Manchester “to build upon the fantastic work already under way to promote sustainable and active travel choices”.

As well as helping to reduce congestion and traffic emissions, encouraging employees to cycle to work is also known to reduce illness and stress levels amongst staff.

The government has committed £300 million to support cycling and walking over the course of the current Parliament.

For more information about the support available for organisations in Greater Manchester, click here.