One of the UK’s biggest property funds, which owns shopping centres across the country, has alarmed investors by banning withdrawals and blaming both Brexit and the retail downturn for its problems.

One of the UK’s biggest property funds, which owns shopping centres across the country, has alarmed investors by banning withdrawals and blaming both Brexit and the retail downturn for its problems. The £2.5bn M&G Property Portfolio was suspended after “unusually high and sustained outflows” – demand from investors for their money back – prompted by “Brexit-related political uncertainty and ongoing structural shifts in the UK retail sector”.   M&G own the Arndale in Manchester.

Business believes it is more important for the government to get the UK’s post-Brexit trade relationship with the EU right than to get a deal done quickly, according to a new survey. The findings emerged as the Institute of Directors issued a plea to whichever party wins next week’s general election for clarity on its negotiating objectives for what the group said would be “choppy trade waters” in the period after the planned Brexit date of 31 January.

U.K. businesses see a 46% probability that the country will leave the European Union with a deal next year, according to a Bank of England survey. While the figure increased after the government requested an extension to the end of January, it reflects the lack of clarity firms are still facing more than three years since the vote to leave. The 2,987 companies in the central bank's November Decision Maker Panel put a 16% chance on a departure without an agreement in 2020. Almost one in five now see Brexit occurring in 2021 and 12% say it will never happen. 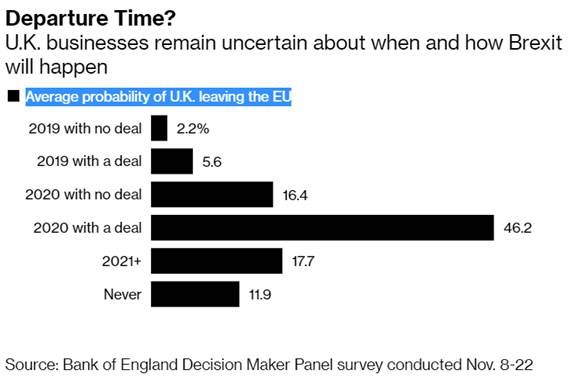 Brexit supporters are more likely to live in areas most threatened by the economic impact of automation, according to a study of the impact of robots and artificial intelligence in the workplace. A map of the parts of the UK likely to be hit by automation fits more closely with the map of leave voters than any other factor, said the Institute for the Future of Work (IFW).

Small business owners are feeling optomistic about 2020 - despite the political uncertainty and financial challenges facing them. A staggering 86% are confident they will achieve their main goal in the coming year regardless of Brexit, political changes and rising costs, reports the Express. The study, comissioned by Vistaprint, an online provider of marketing products and services to small businesses, also found that UK business owners are most likely to feel "confident", "optimistic" and "prepared" for 2020. However, one in five admitted to feeling some apprehensive about what is to come.