This week has seen a 0.2% contraction on GDP, the first economic contraction since 2012.  The Office for National Statistics  (ONS) reported that in the quarter to June 2019, GDP contracted, influenced, in the main, by production and construction sectors, while the service sector saw a near flat growth of  0.1%.

The ONS commented that “the trade deficit narrowed markedly, as imports fell following a sharp rise in the first quarter ahead of the UK’s original departure date from the EU" 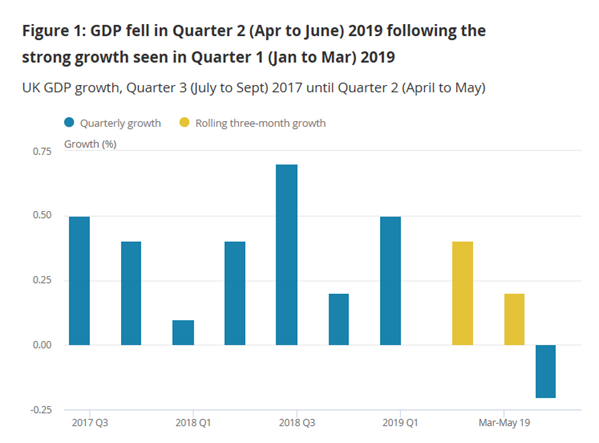 PwC senior economist Mike Jakeman said: “There is ... little doubt that the economy is stalling, regardless of the volatility in the data.” He said the Brexit crisis and the uncertain global outlook left Britain’s economy on a “knife-edge” for the third quarter.

Chancellor, Sajid Javid told the BBC he was not expecting a recession “at all”. He added that the figures - which none of the 51 economists polled by Reuters predicted - “were not a surprise in any way”.

Sajid Javid, told the BBC  that he does not expect the UK to slide into recession after data showed the economy shrank by 0.2% between April and June.  Sajid Javid was speaking after the Office for National Statistics said the economy had contracted for the first time since 2012.  The surprise decline came after Brexit stockpiles were unwound and the car industry implemented shutdowns.   The pound sank after the data was released, raising fears of a recession.  Against the dollar sterling fell to $1.2025. Against the euro, it dropped throughout the day to €1.0736, a level not seen since the global financial crisis a decade ago.

The CBI responded to the latest GDP figures showing that the UK economy shrank by 0.2% in the second quarter of this year.

Alpesh Paleja, CBI Lead Economist, said: “The contraction in economic activity over Q2 is concerning, but much of this is due to a number of one-off factors.

“Growth has been pushed down by an unwind of stockpiling and car manufacturers shifting their seasonal shutdowns. Nonetheless, it’s clear from our business surveys that underlying momentum remains lukewarm, choked by a combination of slower global growth and Brexit uncertainty.

Direct access for Britain’s financial sector to the European Union after Brexit is increasingly under threat as political will for an industry deal fades and the bloc toughens requirements for recognizing other countries’ financial rules. Ensuring the UK’s large financial industry could still operate across the EU from its home base was one of the central issues during early divorce talks after Britain voted to leave the EU in June 2016.

Rolls-Royce Holdings Plc’s cash outflow ballooned in the first half as a bottleneck in plane deliveries at Airbus SE and Boeing Co. reduced engine revenue and stockpiling for a no-deal Brexit led to a build up of parts.  Europe’s biggest jet-engine maker posted negative underlying free cash flow of 429 million pounds ($522 million) for the six months, almost six times the level of a year earlier. The shares fell as much as 2.3%.

Sky reports that a  watch list of businesses  that could be damaged by Brexit and may need to be supported with public money has been drawn up by the government. The exercise, known as "Operation Kingfisher", was confirmed for the first time by cabinet minister in charge of no deal preparations Michael Gove. Speaking to journalists in Belfast, he said the scheme "will be there so any businesses that may be temporarily affected by changes of circumstances that are related to Brexit can be supported".

Concerns around the strength of Sterling  continues as many investors are reported as saying a no-deal Brexit would send shock waves through the world economy, tip Britain’s economy into a recession, roil financial markets and weaken London’s position as the pre-eminent international financial centre.  The pound, which was trading at $1.50 on the day of the 2016 referendum, dropped more than 1 1/2 cents to $1.2213 on no-deal fears, the lowest level since March 2017. Sterling has fallen more than 2 1/2 cents since Johnson was named leader.