The Prime Ministers Brexit Withdrawal deal was not supported in the House of Commons last night.  The implications of the no-vote are still to be analysed but the next stage of events will be a second vote this evening, asking MPs if they want a no deal scenario taken off of the negotiation table.  The government, as a result of last night’s vote, has issued information on temporary trade tariffs of goods coming into the UK if the UK leaves the EU without a deal.

The government has announced that 87% of goods coming into the UK will not have tariffs applied.  This is a temporary arrangement to cover a no deal exit on the 29th March.  The tariffs that are imposed are there to protect some industries, including car and meat farming.  A full announcement from the HMRC and Department of International Trade can be seen at Temporary Tariff Regime for no deal

There may be a further two evenings of votes.  The BBC has produced a causal chain infographic that covers the options for the coming days (source: BBC politics site ) 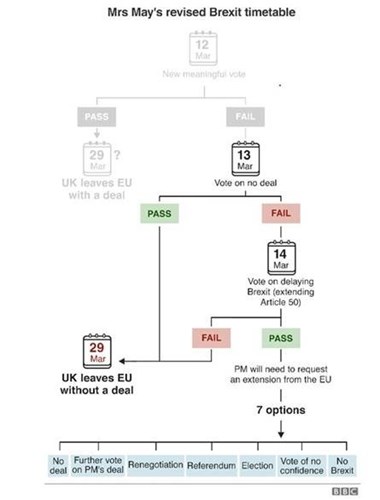 The EU council is now saying that a no deal exit possibility has never been higher  and there have been some questions around whether an extension to Article 50 would be approved, should that be requested through tonight’s vote.

The rejection of the Withdrawal agreement has not been well received by the business community, who are seeking trading stability.  Carolyn Fairbairn, CBI Director-General today, said “Enough is enough. This must be the last day of failed politics.

“A new approach is needed by all parties. Jobs and livelihoods depend on it.

“Extending Article 50 to close the door on a March no-deal is now urgent. It should be as short as realistically possible and backed by a clear plan.