It seems a lifetime since Brexit was the key topic people seemed to discuss, whether in business related forums or in general walks of life. Events in the last six months definitely put Brexit on the back foot. As we, hopefully, begin to emerge from a Covid-19 world, business emphasis and attention has rightly refocused on the UK leaving the EU at the end of 2020.

When the UK population decided to leave the EU back in June 2016, there was an instant and tangible effect even though the exit wouldn’t actually take place for years to come. Overnight, Sterling plummeted by up to 15% versus the Euro and US Dollar. Nothing fundamentally had changed, but currency market movements are propelled by speculation and businesses which trade internationally were immediately affected.

For UK exporters, suddenly their product to overseas buyers became much more desirable. Export tariffs in a Brexit world have been discussed for hours on end and this will be a key topic of negotiation in the next few weeks. However, right now the ‘Made in Britain’ brand is sitting pretty. UK importers, on the other hand, immediately saw their costs surge overnight and were left with some tricky decisions to make; to pass those extra costs on to customers, thus potentially becoming less competitive, or swallowing the cost themselves and eroding profits. What does the future hold?

Volatility became less aggressive, albeit ever present, throughout 2017, 2018 and 2019 especially when we had to endure the change of leadership in Government and UK elections. It was only when Covid struck in early 2020 did we see a huge spike in currency volatility over such a short period of time.

Between 18 Feb and 19 Mar, we saw Sterling decline by over 12.5% versus the Euro and 13.5% versus the US Dollar purely on concerns and uncertainty how this pandemic would impact the UK economy. To put that in perspective, a business needing to make a EUR 100,000 payment to a supplier in Feb 20 would’ve been c.£12,000 better off than making the exact same payment in mid-March, purely because of the movement in Sterling. It has since retraced most of that move, indeed against the US Dollar it recently exceeded pre-Covid levels. 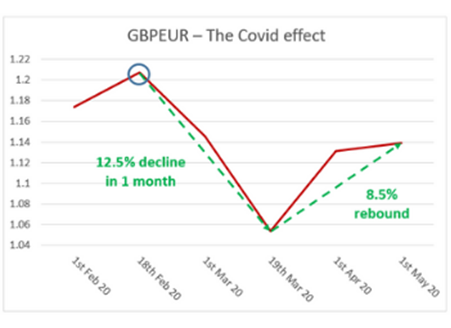 It’s impossible to predict where currencies will trade over the coming weeks and months so businesses should not be speculating but rather utilising FX hedging tools to protect profit margins and give themselves peace of mind and clarity over costs. You feel this will be more important than ever as we move ever closer to the Brexit date of 31st December 2020. Negotiations are continuing to take place as both the UK and the EU look to find a common ground without losing face to the general public.

At this stage, a deal of some description is expected to materialise but a ‘No Deal’ scenario cannot be ruled out however banking analysts do not foresee this as the likely outcome. Such a scenario is predicted to weigh on Sterling once more. Talk of potentially seeing it as low as 1.05 and 1.20 versus the Euro and US Dollar respectively have been muted.

What can businesses do to protect themselves from currency movements?

Ultimately, no one knows what will happen over the next few months and years. Will Covid-19 fade away in to the abyss or will there be a resurgence in cases in to the winter months? Will Brexit negotiations move along smoothly and swiftly, or will there be further stumbling blocks before the end of the year. What will happen in the US elections? Will the US/China trade war rear its ugly head again? All of this uncertainty will affect the movement of Sterling against other currencies.

Businesses should not be sitting on the side lines hoping for the best when it comes to managing their FX exposure. Doing nothing is doing something. Leaving currency exposure unattended is an easy way of potentially eroding valuable profits. The good news is there are a range of useful tools and products to help mitigate this risk.

Getting in touch with a reputable and credible foreign exchange broker should be the first point of call. They will be able to understand the business requirements, discuss different solutions available and suggest strategies which minimise risk and maximise potential beneficial moves in currency. Every company is different and it is imperative that the right strategy is applied to each business.

If you would like a non-obligatory conversation about this, please let your trade advisor know, who can set up a meeting in due course.

This blog was wrote by Luke Walden at Moneycorp