Josh Hickford, General Manager at metal fabrication firm Trufab, talks to us about making huge ‘no-brainer’ energy savings and why the engineering industry needs to play catch up on sustainability.

Trufab is a bespoke sheet metal manufacturer in Rochdale. It started from the smallest of beginnings in 1983 and has worked its way up to a 68,000ft manufacturing site and more than 70 employees.

The company focuses on challenging, bespoke projects across a wide range of sectors, from food and pharmaceutical to aerospace and nuclear.

Despite the challenges of COVID-19, Trufab is enjoying a successful period of growth and is actively searching for new engineers, with a plan to increase the workforce to over 100 people by March 2021.

Over the course of 2020, General Manager Josh Hickford (pictured below) worked closely with specialist resource efficiency advisor, Carl Hirst, to achieve remarkable energy savings and protect against the risk of price rises in future with a new compressed air system. Trufab received a £10,500 Energy Efficiency Grant for the project. 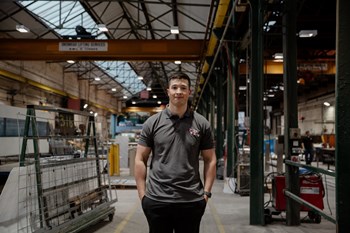 What was the problem with your compressed air system?

Compressed air makes up a big portion of our electricity bill. This is partly because the lasers we use to cut sheet metal run on nitrogen, so we require nitrogen as well as general air in our process. We were using an on-site nitrogen generation plant, but it was hugely inefficient and not fit for purpose. We were also using several old fixed speed compressors, which always ran at 100 per cent regardless of how much they were actually needed.

Together, this system made up 70 per cent of our electricity bill. When looking at energy efficiency, obviously you go with the biggest number first, so it was at the top of our to-do list.

What was the solution?

Over the summer we replaced the nitrogen generator with a new liquid nitrogen system and replaced three of the old compressors with a single, much more efficient, variable-speed compressor.

The project is expected to deliver around £52,000 a year in energy savings. I knew it was going to have a big impact but that figure surprised even me. It was an absolute no-brainer – we installed the new system and with the grant, we received it paid for itself really quickly.

Changing to direct-fed liquid nitrogen also gives a better cut on the laser, which in turn has reduced our processing time and improved performance on the shop floor. So we’re not just making energy efficiency gains, we’re also making productivity gains and reducing re-work.

How useful was the support you received?

The most challenging part of the project was that it wasn’t just about changing compressors; we also had to get rid of the nitrogen generator because it was so inefficient. I wasn’t aware there was financial support available for this sort of project until I started working with Carl – who immediately saw there were massive energy savings to be made.

The support from Carl made the project even more of a no-brainer for us. He was able to run all the numbers, which definitely helped to push the whole project over the line. I had to propose the investment to the directors, and when you put those sorts of numbers in front of someone, showing that it will pay back quickly, why wouldn’t you do it? 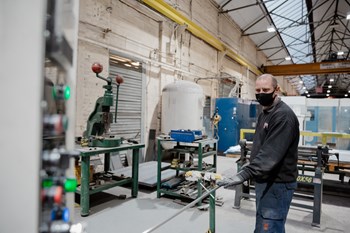 Are there any other energy-saving projects on the horizon?

Absolutely. We’re in the process of switching our old halogen lighting over to LEDs, which now cover around 60 per cent of the building. We’re also looking at moving much of our fleet to hybrid or electric over the next few years.

The biggest project on the horizon, though, is that our entire roof needs replacing. That’s a hugely expensive process to go through, so we’re looking at our options in terms of insulation and perhaps solar to get some payback.

We’re also looking at our heating. A third of the building has been given newer, more energy-efficient heaters, but the other two-thirds are still very inefficient – especially when you consider that the workshop space is 8-9 metres tall. Heating that space is really expensive, especially in the winter months. We’ve looked at various solutions, such as infrared heating that will heat people rather than space, so there’s definitely something we’re looking to do on heating in 2021.

Beyond energy savings, what else is driving you to take action on energy efficiency?

I genuinely believe that it’s only a matter of time before the government starts introducing some laws around energy efficiency in your company. Unless you start doing these things now, you’re going to get cut short eventually. A lot of companies we do work for also have environmental standards like ISO 14001, and they’re pushing their supply chains to do the same.

As an example, we manufacture some of the backs of delivery vehicles for one of our customers and we saw recently that Amazon has pledged to become net-zero carbon. Everybody in their supply chain will have to follow that path, so we’re effectively on that path as well and will have to up our game.

Not only is it nice that this may perhaps open up a new window of work for us, it’s also important that everyone does their bit. We’ve all got to look after the world we live in, and factories are a massive contributor to greenhouse gases.

What do you think needs doing to encourage more action in your industry?

It’s about getting the message out there that there are savings to be made and then saying that, as a repercussion of saving so much money, look at how much you’ve done for the environment. This is what we’re proving. You can cut your overheads and get a nice badge at the same time.

I think it’s a generational mindset. I’m 27 years old; I’m from a generation that understands these things. The engineering industry tends to be quite old fashioned in this regard, and it needs to catch up.

We can help your business boost its profitability by improving its resource efficiency. Find out more: Boost profitability, reduce operating costs, save money