We talk to Matt Edgley, group commercial director at Manchester data centre operator Teledata, about the company’s ground-breaking energy efficiency drive that has turned heads in the industry, and how "turning things off in the evening and at weekends probably saved us £2,000-3,000 a month".

I didn’t have any serious energy management experience before Paul came along, so it was a steep learning curve but a really interesting one as well.

Founded in 2007, Teledata has grown from a relatively small data centre to one of the biggest and best-connected in Manchester, with a 70,000sq ft facility offering co-location and cloud hosting solutions, workplace recovery suites and technical office space.

The company approached GC Business Growth Hub for support with energy efficiency in 2016. As an intensive energy user it had always followed good practice, but without the assistance of a specialist energy management partner had not been able to go as far as it wanted. With guidance from one of the Hub’s energy efficiency advisors, Paul Cooper, and part-funding from Energy Efficiency Grants, Teledata has since spent more than £1 million on cutting-edge technology – including a number of industry firsts. 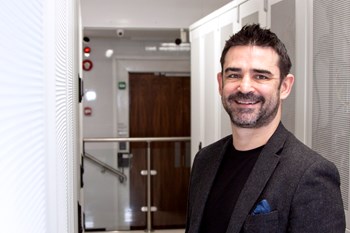 Why do data centres use so much energy?

First of all, servers require power. In our data centre we’ll soon have 450 server racks, each holding 20-30 servers. A rack uses around 2-5kW of power on average, so scale that up and it’s a huge IT load which is running 24/7.

On top of that, running all those servers generates heat, so you need a lot of air conditioning to keep the data centre cool. Before you know it, you’re using as much power as a small village within a single building!

What prompted you to contact GC Business Growth Hub for support?

As we grow, power use is constantly increasing, which is a real challenge from an energy management point of view. The more efficient we can be, the more capacity we have to grow within our existing infrastructure.

We were already looking at energy efficiency and had some major projects in mind, but we’d been sitting on them for probably 18 months or more and had never quite built up the confidence to take them further. We needed an independent expert to help us, which is where Paul came in.

What was the first thing you did?

We started off by doing some extensive energy logging of our site to measure consumption in different areas. This helped us understand our energy profile on a much more granular level and see exactly where all the power was being used.

Even now, with everything we’ve done since, I still think it’s the most important thing we did. I come from a technical, ‘geeky’ background and became quite obsessed with how the building was using power – we could even narrow it down to the kitchen on the 7th floor and see when the table-top coffee machine was running!

What key projects have you invested in since?

Our first investment was to install submetering in the building so we could turn off certain areas when they weren’t needed. This led to some behavioural changes such as turning things off in the evening and at weekends. Because of the size of our building, that probably saved us £2,000-3,000 a month straight off.

Next, we upgraded the fans and motors in our air conditioning units so they could operate at variable speeds. By putting temperature sensors into the cold aisles, we were able to use software to tell the units how hard they needed to run to maintain an acceptable temperature, whereas previously they’d always run at 100 per cent. We got to the point where the system could turn two out of every eight units off completely and still maintain the right temperature.

We then moved onto a bigger two-part project: installing an ultra-low loss transformer to minimise waste electricity coming in from the mains, combined with some cutting-edge voltage optimisation technology to regulate incoming voltage. This means we set the voltage level and stop it from fluctuating, which reduces energy wastage and wear and tear on our equipment. This project alone gave us an 8-10 per cent efficiency saving.

Finally, we installed a 2MW battery storage system (pictured at the top of this page) in the car park that’s charged up on a daily basis and discharged according to need. When the grid is struggling with demand during busy periods – which is when electricity is at its most expensive – we can now pull power from the batteries instead of pulling it from the grid. We were the first co-location hosting provider to do this in the UK.

So how much have you spent on energy management in total?

We’ve easily spent over £1 million to date; probably approaching £1.5 million. It sounds like a lot, but when you consider our energy bill is around £1 million a year, it’s been more than worth it.

It’s had a big impact from an efficiency savings point of view, but also from a capacity point of view. Without these investments our expansion as a business would have been limited because we have a limited supply from the grid.

Beyond efficiency savings and increased capacity, what other benefits have you experienced?

Everything we’ve done is a big part of our story as a business. We’re unusual in that we’re based in an old 1970s building, so it was quite inefficient to begin with. But when you come in and see how it’s been transformed over the last 13 years, it surprises everyone.

More and more customers are now asking environmental questions as part of their tender process or their own environmental commitments. Because of the PR we’ve been able to get out there about what we’ve done, we’ve actually seen an increase in business.

In fact, the biggest contract we’ve ever signed came through a press release we did on energy efficiency. It was a big reason the client chose us, and the contract has enabled our next phase of expansion – it’s a really exciting time for us as a business.

You’ve clearly gone above and beyond standard practice for your industry. Why haven’t more of your competitors done this?

The majority of data centre operators don’t want to be seen to be the first to do anything, especially if it’s to do with power supply. Data centres need to be 100 per cent reliable, so they tend to stick with what’s tried and trusted.

But we like to be the first. We may be a relatively small provider, but we stand out by doing the things nobody else is doing, without being reckless – which is why Paul’s support has been so important.

The scariest moment for me was when we ripped out our old transformer, which meant running the whole data centre on diesel generators until the new transformer was in place. We had a standby generator in case the main one failed, and a standby for the standby as well!

Do you think your industry will catch up?

I think there will have to be a big change in the next 5-10 years. Data centres aren’t getting any smaller and there’s going to be a lot more of them. Successful data centres are going to have to make the most of what they’ve got and be more intelligent about how their energy is being used and delivered.

Within days of putting out our first press release, I had several messages from other data centre operators wanting to know how we’d found the experience and what results we were expecting. It shows that these things had been on people’s minds, but they hadn’t studied it enough to know whether it would be worth it and whether they were going to get the payback on their investment.

Honestly, I don’t think we would have followed through with a lot of what we’ve done if it wasn’t for Paul. It was such a big investment and we didn’t have the understanding or the knowledge to make those decisions on our own.

Paul sanitised everything that we were being told; he met with suppliers and contractors to make sure we were doing things in the right way and was the independent voice of reason we needed. It got to the point where I felt like I didn’t have to understand every single little detail anymore because I had somebody there who did.

His passion for what he does rubs off on you. I didn’t have any serious energy management experience before Paul came along, so it was a steep learning curve but a really interesting one as well.

Now we’re armed with the right knowledge for making future decisions. We could sit in a meeting and literally take somebody through everything and explain exactly where we get our numbers from. That in turn gives confidence to the end user that ‘actually these guys know what they’re doing’.

Established in 1935, Rowlinson Knitwear provides specialist schoolwear and corporatewear, employing around 50 staff in Stockport and half a dozen more in its overseas partner factories. The company has received support from a number of GC Business Growth Hub services, including a £12,000 Energy Efficiency Grant towards the cost of LED lighting and advice from our Eco-innovation service on future textiles.