Peter Allen, Director of Bury-based waste management firm ISM Waste, shares his thoughts about the future of waste and how ISM has always kept ahead of the environmental agenda.

Founded back in 1965 by Peter’s parents with reputedly £9 to their name, ISM Waste has developed from a small scrap metal operation into a leading regional waste management and recycling company that employs 45 people.

Thanks to state-of-the-art facilities following a multi-million-pound investment, ISM recycles 90% of all the waste it collects. The remaining waste is transformed into refuse-derived fuel (RDF) to be recovered in waste-to-energy plants.

The company has been working closely with Environmental Business Advisor Rebecca Chedd to maximise the energy efficiency of its site, which already incorporates a rooftop solar PV system. In 2020, ISM received an Energy Efficiency Grant towards the cost of upgrading lighting across its site to LEDs, achieving annual cost saving of over £13,700.

ISM was founded over half a century ago. When did recycling and sustainability become a key part of the business?

It’s been there in one form or another right from the beginning. When my dad set the business up, he was effectively dismantling old machinery from the industrial mills that were being decommissioned around Lancashire. He passed on what he could recover to scrap metal smelters and foundries over in Sheffield. We now call this ‘recycling’, but back then that word didn’t even exist!

As the business grew, my parents spotted an opportunity to move into general waste as well. Before long, they realised that this waste, like the scrap metal, wasn’t just waste – it was made up of materials of varying value that could be extracted. So in the late 1970s we moved to the site we still have today and began focusing on materials recycling, which was a very bold move at the time because landfill was so cheap.

Mum and dad could see what was coming. In 1996, the government introduced the Landfill Tax. Despite being a slow burner at first, the cost of landfilling gradually rose from around £7 a tonne to the £96.70 it is today. So we were ahead of the game.

How does the business operate today?

In 2000, we began significantly expanding our facilities after recognising that we needed to up our game even more. We invested around £5 million to create a fully mechanised plant that could capture more recycling and prepare the rest to be recovered as energy.

I describe it as a ‘waste transformation factory’ – we take a raw ingredient in the form of waste that would otherwise go to landfill and turn it into a useable commodity.

What measures have you taken to improve the environmental impact of your operations?

We installed solar PV on our rooftop in 2015 which generates a comparable amount of energy to our electrical use on-site, so in effect our electricity usage is carbon neutral with any excess generation going back onto the national grid as green energy. It’s all cleaver stuff and a smarter way of working.

More recently, we’ve had the benefit of the Growth Hub’s input to change all our lighting to LEDs, which turned out to be a really good energy reduction project thanks to the grant we received.

We’ve also taken action to reduce diesel emissions from our trucks. We discovered many years ago that our trucks spent quite a lot of time idling on customer sites. So we spoke to Volvo, who installed technology that cut the ignition after a given period of time. That alone saved us around £25,000 a year in fuel, and we’re still enjoying that saving today. Start-stop technology is normal nowadays, but it’s another example where we were ahead of the game before the millennium beckoned.

We’re also passionate about reusing waste wherever we can. Several years before we built our new facility, a local customer told me they had thousands of Teflon coated solid wood panels that they needed to recycle. I knew I was going to need wall protection in the new site, so I asked the business to hold onto them. When the time came, we designed a solution to bolt the panels together to create interlocking wall protectors that we use all the way around the inside of our building. That saved us at least £25,000 in concrete costs. So it’s not just about recycling; we’re always looking to reuse resources when we can. 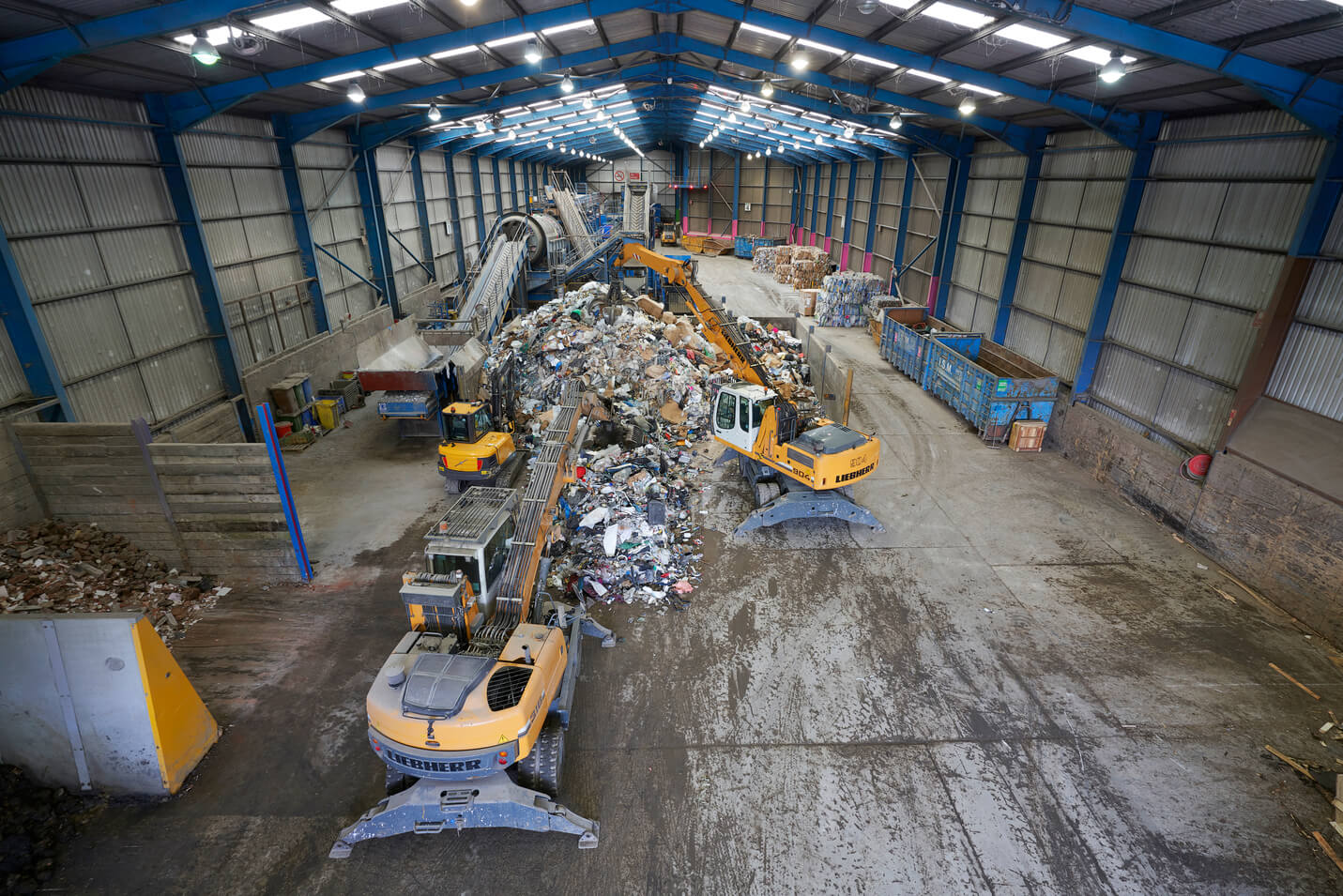 How are you responding to Greater Manchester’s forthcoming Clean Air Zone?

We identified three years ago that we needed to invest in upgrading our fleet ahead of air quality requirements being brought in. It’s going to cost us around £1.5 million to bring our trucks up to the required emissions standard, but it’s the right thing to do and the penalty of not doing so would be significant.
We’ve had new trucks on order for the last two or three years and only received the first one recently, which just shows you always need to be thinking ahead. If you’re not in early, you’re going to be behind the queue, and that goes for the environmental agenda in general.

What other environmental improvements are you exploring next?

The tax increase for red diesel is going to add considerable costs to our business, so in the long-term we are looking at options to electrify our plant. The next step for us is to expand our solar array, which is something we’re exploring with Rebecca at the Hub.

The work is never done; there is always something new to look at, like whether we’re wasting energy on compressed air. Again, we benefitted from the Hub on that with a compressed air leak survey. I’m also keen to explore rainwater harvesting on our roof for washing our trucks.

How useful has the Hub’s support been?

Rebecca has been absolutely fantastic. The support we received in calculating the energy and carbon reduction of the LED lighting investment and what it would mean in real terms, as well as the grant funding, really put the case forward. Without the Hub, we wouldn’t have got that over the line.

We’re certainly not finished there. I’m looking forward to speaking to Rebecca about expanding our solar, electrifying our plant and looking at our carbon footprint. We have to rely on expert help from the likes of Rebecca and her connections to decide what the best options are.

There’s a wealth of knowledge and connections to call upon. You could do a hell of a lot worse than picking the phone up and having a chat with Rebecca about what you are thinking of doing.

The waste industry faces a lot of challenges as we transition to a sustainable, zero carbon economy. What will we have to respond to over the coming years?

Take laminated plastics. We cannot recycle a product that is made of two different plastics stuck onto each other. We’ve got to overcome these challenges in society to ensure that materials can all go back into the system. We have to start seeing waste as a resource.

No business can afford to be a commercial dinosaur; everybody has got to play a part. If you don’t, you’re going to be penalised for it. I’d like to think we are playing a part in that shift with our humble efforts here in Ramsbottom. I try to see things that are coming, like my parents did, and promote that mindset to our customers. When we all start thinking like that, we’re getting into a better place.