After the summer long Conservative party leadership race over, businesses are turning their attention back to preparing for the end of October deadline for exiting the EU.

Business representatives and big companies are starting to lobby the new Prime Minister again, wanting their concerns about the EU exit without a deal, to be heard.

But the question being posed by business is how a negotiation can be reopened and what are the risks associated with the potential of a no deal?

In his new position of Chancellor of the Duchy of Lancaster, Michael Gove has been made responsible for overseeing EU Exit. The government is now "working on the assumption" of a no-deal Brexit, Michael Gove has said.    Mr Gove said his team still aimed to come to an agreement with Brussels but, writing in the Sunday Times, he added: "No deal is now a very real prospect."  Treasury sources say they expect more than £1bn of extra funding to be made available later this week for no-deal planning and preparation.

The boss of BMW has urged Boris Johnson to respond to calls from business to find a compromise on Brexit – and offered to travel to the UK to deliver the message to the prime minister in person. Speaking as the German carmaker reported falling profits due to its investment in electric vehicles, BMW chief executive Harald Krüger said it would be a “lose-lose” scenario if the UK leaves the EU without a deal.

The pound fell below $1.21 for the first time since January 2017 as concerns mounted that the UK is heading for a no-deal Brexit. Sterling fell to $1.2085 before edging up to $1.2104, down 0.45% against a stronger US dollar. Against the euro the pound fell 0.01% to €1.0978. The dollar rose on currency markets after the US central bank, the Federal Reserve, cut interest rates on Wednesday but indicated there were fewer cuts to come than expected.

Direct access for Britain’s financial sector to the European Union after Brexit is increasingly under threat as political will for an industry deal fades and the bloc toughens requirements for recognizing other countries’ financial rules.

The BBC report that the government has announced an extra £2.1bn of funding  to prepare for a no-deal Brexit - doubling the amount of money it has set aside this year.  The plans include more border force officers and upgrades to transport infrastructure at ports.  There will also be more money to ease traffic congestion in Kent and tackle queues created by delays at the border.  Shadow chancellor John McDonnell described the plans as "an appalling waste of taxpayers' cash".

Hauliers will face increased fines and civilian traffic officers will be granted new powers in the event of a no-deal Brexit under government plans to try and avoid debilitating customs delays at Dover.   Sky News reports the proposals, set out in a Department of Transport consultation, will see Highways England Traffic Officers (TOs) given the power to demand and check drivers' documentation for the first time.

Investment in Britain’s car industry has slumped due to fears about a disorderly no-deal Brexit, adding to signs of a manufacturing downturn even as consumers stay relatively resilient, surveys and company comments showed on Wednesday.

Councils have spent money repaving roads , hiring vets, stockpiling food for school meals and registering their own staff for the EU settled status scheme in preparation for Brexit.  The burden fell most heavily on councils in strategically important areas, such as those near ports that may have to deal with increased checks and lorry tailbacks in the event of a no-deal Brexit, it is reported.

The BBC regularly updates the potential paths to EU Exit at https://www.bbc.co.uk/news/uk-politics-46393399 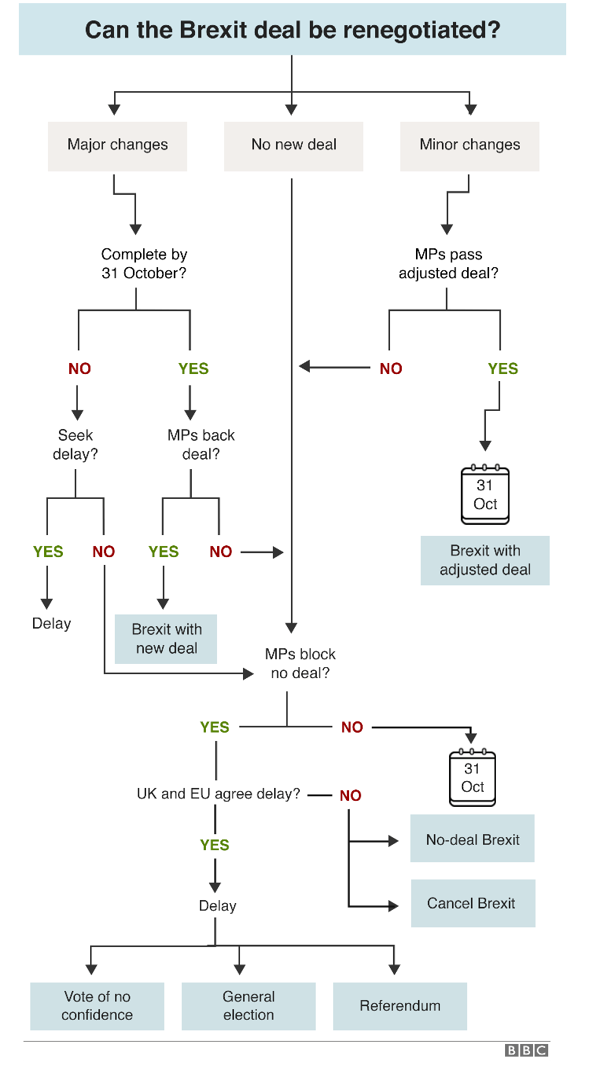