The Growth Company exists to enable growth, create jobs and improve lives. In March 2020 GC immediately adapted its resources to reach out directly to GM businesses impacted by the pandemic, providing support and guidance.

One of the most important tools that has informed our approach is continually monitoring a range of data and intelligence to understand the impact of Covid-19, and other economic risks and opportunities. More than 7,000 GM businesses have participated in the weekly GC Survey.

Much has already happened in 2021. We are back in a national lockdown which will have an impact on the GM and national economy. However we felt it was important to look back and share our survey findings for 2020 with you.

The economic context as 2020 came to a close

As 2020 came to a close we began to see signs of economic recovery. Official figures showed the UK’s GDP output grew by 15.5% from July to the end of September, the largest increase on record. However, the latest survey and economic indicators showed signs of a slowdown as we moved into 2021. Consensus of 100 leading economists (polled by the FT), suggested that the economy would return to more ‘stable conditions’ well into 2023. Looking further to the future, the Office for Budget Responsibility forecasts suggested that output will be 3% lower by 2025; equivalent to £1,400 less per household.

Within Greater Manchester, leading indicators highlighted an easing of cashflow risk, and a rise in firms reporting increasing sales in the latter part of 2020. However, the latest risks to the economy are mirrored in both the most recent survey results and insolvency risk data. This showed that 16.5% of firms in GM are reported as having one or more red flags (a sign of financial stress) compared to 14.5% in the UK. This represents the highest levels of stress recorded by local businesses this year. The sectors most at risk (according to the December data) include real estate, construction, business services, utilities; and by volume tourism, hospitality, leisure, and retail.

The main impacts reported by business since April this year have consistently been falling sales, cashflow risks, and no reserves. Almost immediately, as the nation entered the first lockdown, the proportion of survey respondents reporting decreased sales rose to 75% within one month (March to April 2020), and peaked at 90% in mid-summer as the full impacts of lockdown took its toll.

Since the end of the July peak (as the lockdown eased), the proportion of firms reporting decreased sales fell. This was also reflected by a sharp fall in firms reporting cashflow problems, and an increase in firms reporting a stronger position on cash reserves. The latter also being a likely impact of the variety of government support schemes, local grants and loans put in place. The latest position, shown in the timeseries below, indicates the proportion of GM businesses reporting decreased sales and cashflow issues has remained broadly stable throughout December, following a slight rise in the second lockdown in November/December this year. 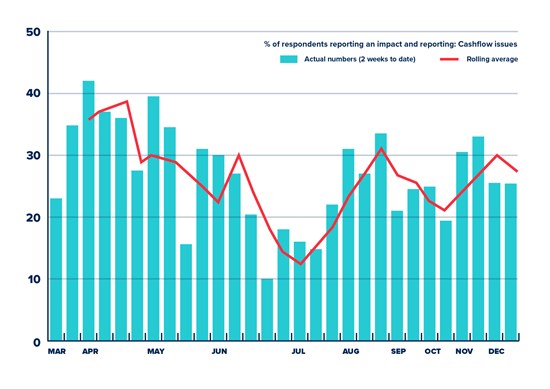 The sectors most likely to report decreased sales and worsening cashflow positions throughout 2020 are in the tourism, hospitality, leisure, creative and cultural industries, and parts of retail. This relates to the parts of the economy that are most ‘exposed’ to lockdown, as well as changes in consumer spending and behaviours, as many firms grew their online sales.

Moving towards the end of 2020, the survey also shows that firms position on cash reserves and redundancy risk have improved.  Around 70% of firms now state they have cash reserves to survive more than six months, compared to around 25% in April this year, prior to the announcement and delivery of support measures. This is also mirrored by an increase in the proportion of firms reporting increased sales.

Figure 3: GC Survey. Proportion of firms reporting they have cash reserves to support their business for different durations 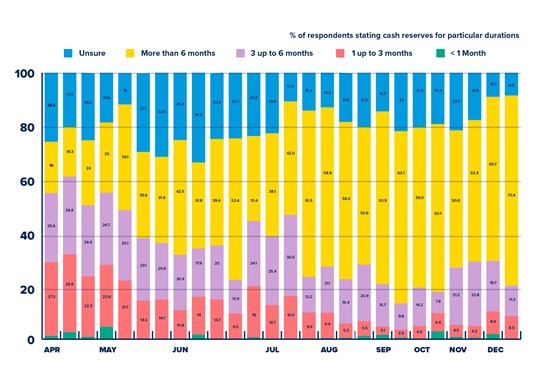 Other commonly mentioned risks and impacts of the current economic crisis include cancellation of events, and difficulties seeing customers and clients. Unsurprisingly these issues peaked at both the start of the crisis, and during lockdowns. More recently there have been increases in firms reporting supply chain disruption. Almost 40% of firms had experienced this issue, particularly in manufacturing. 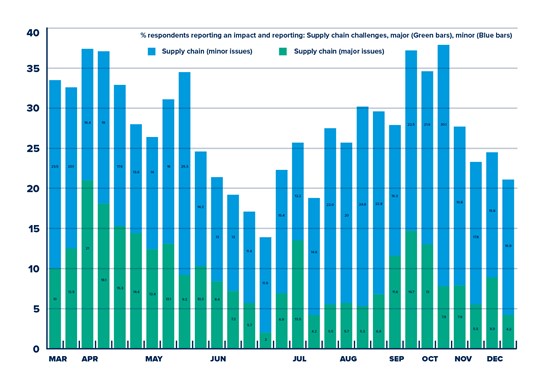 The parts of the economy most likely to report growth during 2020 include digital technology and software (in particular communications technologies, and digital integration), as many firms accelerated their digital transformation plans and investment. Other sectors experiencing growth include healthcare (in particular jobs in administrative roles linked to test-and-trace), and parts of manufacturing (bulk chemicals, testing/diagnostics and life sciences). 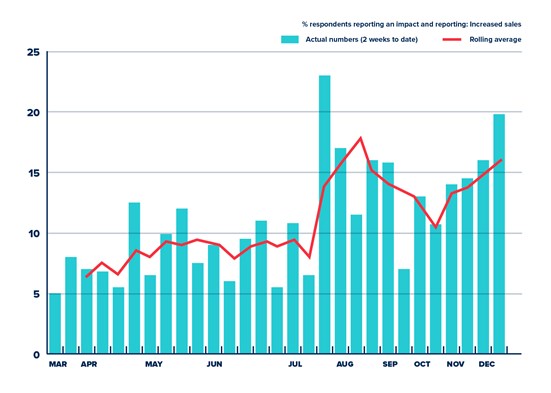 The GC survey includes questions that track impacts on the labour market which can be compared against the latest official statistics. The latest figures from the ONS highlight that the labour market was starting to recover through September and October, and that the impacts of the second lockdown (on redundancy risk and job losses) in November appear to have been fairly muted at the end of 2020.

The latest survey findings have consistently suggested that 70-80% of firms had not made redundancies and were not actively planning redundancies. Throughout the latter part of 2020 around 10-15% of firms said they were planning redundancies – in particular during July, although the latest report suggests the figure is lower. The survey shows that tourism, hospitality and leisure industries are more acutely affected.

The survey trends reflect the spike in redundancies notified to the Insolvency Office around late summer, as firms restructured after the first lockdown. The number then fell back as Government schemes were extended and the economy opened up again after October. In Greater Manchester alone, just over 100,000 people are still on ‘furlough’, down from the 400,000 peak earlier in the year.

Looking at snippets of other national data, it does appear that the second lockdown may have led to a further weakening during November/December. However, this is nowhere near the scale seen during summer. Nationally, flows out of PAYE employment records in November were just over 100 thousand higher than they had been three months previous, but remained well below the levels of job losses reporting back in April/May.

What does the future hold?

The future is notoriously hard to predict, even in stable economic times. OBR forecasts suggest that the UK economy will return to pre-crisis levels in the start of 2023, equally the survey suggests that 40% of firms expect the economy to take one to three years, and 20% over three years, to recover.  Whist the latest surveys show rising optimism, with 60% suggesting profits will grow next year, the impacts of the latest national lockdown announcements will continue to be tracked closely in the survey during 2021.

A combination of the impacts of Covid-19, alongside the risks associated with the transition period outside the EU will combine in complex ways, and we are only really beginning to understand the full impacts of the challenges they face. Around half of firms we surveyed said they were unaware of the full impacts of leaving the EU, and just under half remained neutral in their outlook.

Data on company dissolutions and incorporations does reveal an interesting and emerging trend of company dissolutions being significantly abated due to Government support and forbearance. Many economic commentators believe that the figure will run above the long-term average of the last two recessions, and that across the UK, around 25,000 to 30,000 businesses will close.

Whether these trends continue to strengthen, or alternatively run ‘true’ to previous recessions remains to be seen. The choices facing many businesses, whether to liquidate, restructure, reinvest, also remains to be seen. Indeed, there has been a consistent response in the types of activities firms have undertaken to minimise the risks/impacts they face, and there has been a clear message in terms of the areas of support they need raised in the 7,000 responses.

Why this insight matters to GC

This unique insight provided by GM businesses has allowed us to move quickly and provide a range of services that directly respond to the challenges they are facing, helping them mitigate the impact of the pandemic and drive growth. The main challenges experienced by businesses in the last nine months are likely to continue into the next 12 months.

Alongside the issues outlined above, it is no surprise that the main support needs identified by business include marketing and promotion, financial advice and access to facilities, digital transformation and workforce development. The skill needs of business also remains as important as ever.

GC is continuing to respond to these challenges, through a range of services for businesses and individuals to enable growth. We can only do this by listening to you. If you would like to join the GC Survey respondents list please contact  info@growthco.uk.

The Growth Company and the GC Business Growth Hub have a range of free support available to help GM businesses navigate the pandemic and other challenges, including:

The GC Business Growth Hub continues to be the primary resource for businesses navigating Covid- 19 via its dedicated website. The Hub summarises the latest guidance into digestible summaries, whilst demystifying and signposting support packages offered through Central and Local Government or other providers. In addition, the Hub’s team of expert business advisors are on hand to offer bespoke support for businesses looking to Restructure, Recover and Grow.

Employ GM is a free service designed to support businesses of all shapes and sizes across the city-region. The service is available to help businesses overcome challenges such as businesses needing to recruit due to increased demand for goods or services or for those struggling to keep their workforce in meaningful employment. It can also help individuals who are looking for employment or support for those looking to get back into the workforce.

We’re here to support businesses and individuals within the hospitality, leisure and tourism industry across Greater Manchester through skills, training and recruitment.

Skills for Growth – SME Support is a fully funded tailored service to help up-skill your employees and improve business productivity. We’re here to help you grow your business through re-shaping, developing your talent and enhancing your team’s performance.

Providing free, impartial career advice and guidance across the North West through the National Careers Service. Speak to an adviser on: 0800 100 900

Skills Support for the Workforce

Skills Support for the Workforce will help you to upskill your staff through bespoke support and training. Our flexible approach to delivery will enable you to enhance staff productivity, increase morale and improve staff retention. This includes staff who are on furlough or at risk of redundancy.

For businesses seeking help with new rules and regulations now we have left the European Union, GC Business Growth Hub’s team of advisors are on hand to provide guidance and practical support to make the most of new growth opportunities.

EnterprisingYou offers a unique support programme to the self-employed in Greater Manchester. Whether you want to make your current business more resilient, reduce costs, diversify your service or if you want to move into employed work but need additional skills to do that, we are here to help.