Business Growth Advisor Anthony Boe considers why nurturing your company’s culture, and understanding what drives it, is so crucial to business success.

As Richard Branson once said: “There’s no magic formula for great company culture,” yet the idea of a company culture is something that concerns many business owners, who see it as an important aspect of their enterprise but also one of the most elusive and beguiling subjects to address in a comprehensive way.

The most common definition you’ll hear of an organisation’s culture is: “it’s the way we do things around here.”  Whilst this is largely true, it doesn’t offer us any pointers about the quality of the organisation or, indeed, how the culture developed. It’s also a phrase that could equally apply to a poor organisation as it could an excellent one.

However, there is some truth in this definition, and many would agree a culture is usually one that has evolved over time and will continue to change as the business develops and grows. This is a process that involves many factors from company performance, its size, and location, to the management, external market, staff attitudes and change initiatives. And, of course, it’s impossible to effectively manipulate them all to create a genuinely progressive organisation.

Changes made to any of these aspects can, and will, have an effect on the culture, and not always in a positive way. The main issue here is that culture primarily affects the people within the business and given that the knowledge, discretion and commitment of staff are crucial to success, this makes understanding and managing the company atmosphere extremely important.

For SMEs, this culture is arguably easier to manage, at least initially. The mores and behaviours in the company will often develop and be borne directly from the management team as they build the business. Informal ways of working become an enjoyable daily ritual and a motivating ‘esprit de corps’ drive the business forward.

Eventually, as the business grows, a ‘tipping point’ is reached and something changes. The informal becomes formal, equal colleagues become manager/subordinate, directors become more distant and processes start to creak. Inevitably the culture will change and not necessarily for the better, possibly leading to an increase in staff turnover, the loss of important knowledge and less commitment, all of which will feed through to customers in one form or another. 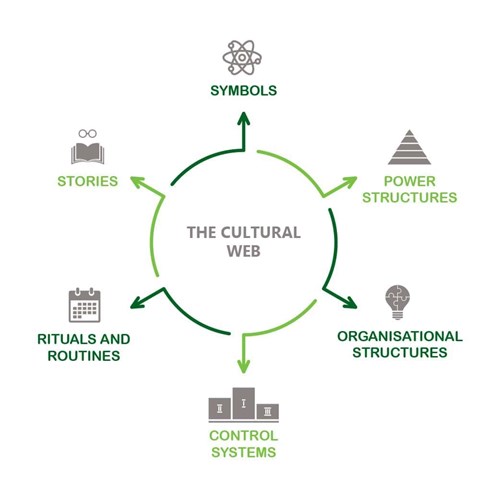 So how does a company combat these risks? It’s not easy but it can be done. Culture, like any other aspect of a business, needs to be understood and planned. If a business knows the culture it has (or wants) it can then identify those things, both formal and informal, that sustain it and look to crystallise and build upon them.

Academics such as Johnson & Scholes (Exploring Corporate Strategy 1992) offer the Cultural Web as a method to understand all the elements or paradigms of a corporate culture. These include ‘Stories’ or accounts of events that staff recall which are meaningful or resonate with them.  Often these have great cultural meaning. Perhaps there was a time everyone stayed until midnight to get a job done and the director ordered pizza all round and a free lie in for all involved.

Another element is ‘Rituals and Routines’, the unique behaviours that companies develop as part of their culture. Things like bacon butties on the last Friday of the month or celebrating everyone’s birthday all have routine or ritualistic elements. Formally analysing and consolidating all six elements of the Cultural web in your business can be a good way to understand and nurture a progressive culture.

If you need something more direct, Cameron & Quinn (Diagnosing and changing organisational culture: Based on the competing values framework 1999) offer a very usable model to analyse cultures and identify their major driving theme.

It uses a group approach based on a scored questionnaire which is mapped to a 2x2 grid to show how individual staff or departmental teams perceive the business. This Organisational Culture Assessment Instrument, or ‘OCAI’, approach shows how strongly a business falls into four key dominant types - a ‘Clan’, an ‘Adhocracy’, a ‘Hierarchy’ or ‘Market’ driven business.

For example, a Clan will be characterised by a supportive, familial feel, informal communications and a largely supportive atmosphere. The downside, however, could be a lack of formal direction and lower levels of personal accountability.  The same is true of each of Cameron & Quinn’s dominant modes, which all have both positive and developmental traits.

In the real world, most businesses will have elements of each but it’s likely one will be dominant.  Knowing this means you can work on the best elements while mitigating the downsides of your business’ dominant type. It will also help if you gain an understanding of behaviours you may need from the other profiles and add them into your thinking. In some cases, you may need to change your type altogether- challenging but also essential to long-term success.

As interesting is finding that only one area of the business has a conflicting view which may be either beneficial or detrimental. Knowing this situation exists will help you decide which, and how to address it!

Whether you decide to use a model or simply work it out for yourself, the important thing is you are aware you have a culture and are concerned with how it can affect your company.  As for general actions, the following represent good practice:

The most important factor, however, is recognising that all companies, regardless of size, have a culture of some kind and this needs to be constantly reviewed, nurtured or indeed addressed in just the same way as sales figures and stock levels.

In doing this it’s possible for all companies to create a culture that their staff can engage with and that offers real, long-term benefits to the organisation.

Get in touch through Enquire & Grow